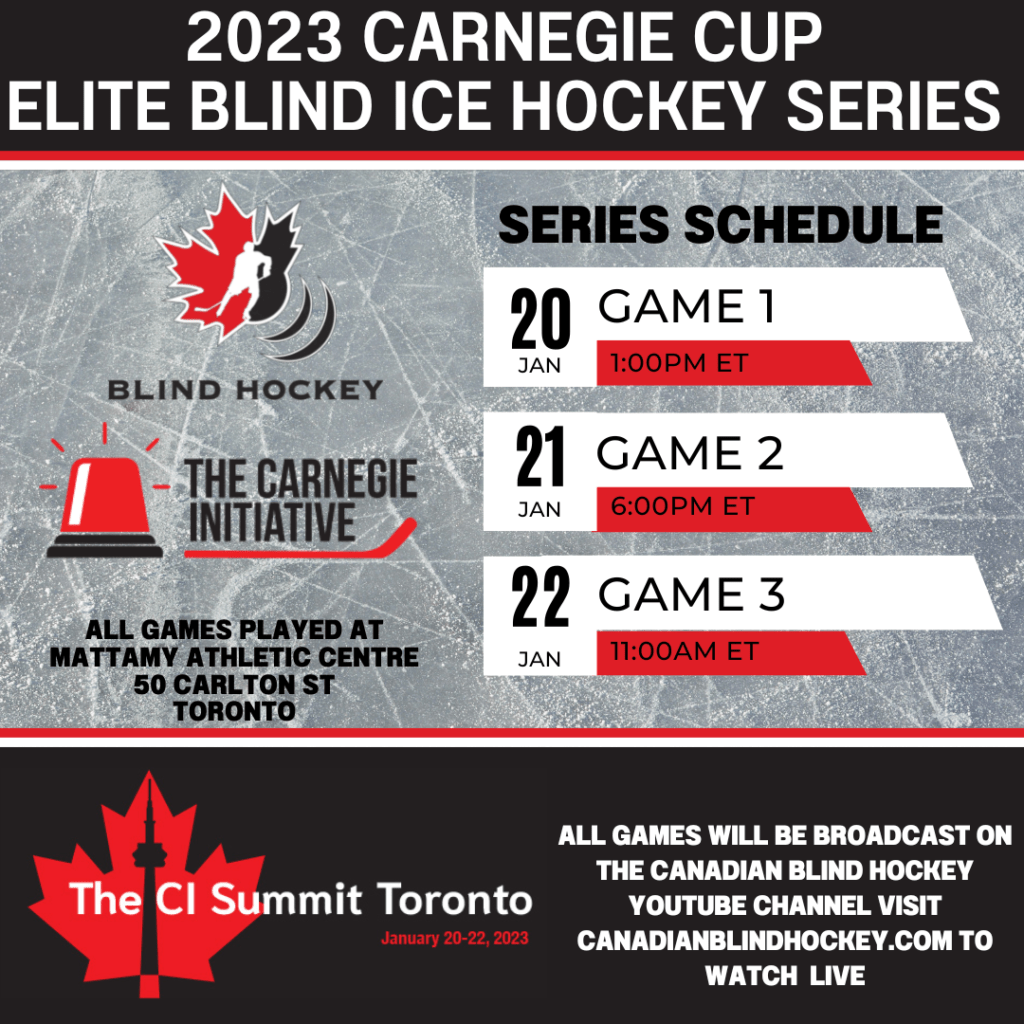 Canadian Blind Hockey is thrilled to announce that in two weeks’ time, on Hockey Day in Canada weekend, the next evolution in the Para sport of Blind Hockey will take place at the inaugural Carnegie Cup in Toronto, ON.  The Carnegie Cup takes place from January 20 – 22 and is an elite Blind Hockey Series featuring some of the very best Blind Hockey players from across Canada, the United States, and Europe who will be drafted into two teams to showcase the fastest, most skilled, and most competitive version of the Para sport that has ever been played.

The Carnegie Cup takes place at the Mattamy Athletic Centre – the former Maple Leaf Gardens – and is free and open to the public to attend and will be streamed live on the Canadian Blind Hockey YouTube Channel.

In addition to the Blind Hockey series, Canadian Blind Hockey is partnering with the Carnegie Initiative for Inclusion and Acceptance in Hockey to host the first-ever Disability Hockey Skills competition – presented by Air Canada featuring Blind Hockey, Deaf Hockey, Para Hockey, Special Hockey, and Standing Amputee Hockey players at 1:00 pm on Friday, January 20 prior to the first game of the Carnegie Cup Series.  The Carnegie Cup is being held in conjunction with the Carnegie Initiative Summit 2023 which is a gathering of thought leaders, industry titans and grassroots champions from across the hockey world. This high-profile weekend-long event will drive meaningful, scalable, inclusive impact and generate millions of media impressions.

Who was Herb Carnegie and How Did He Impact Blind Hockey?

Herb Carnegie, regarded by many as the best Black hockey player to never reach the NHL, was posthumously inducted into the Hockey Hall of Fame in the Builders category in 2022. He co-founded the Herbert H. Carnegie Future Aces Foundation in 1987 with his wife, Audrey, and daughter Bernice, with a mission to inspire youth to be confident and pursue education excellence. The non-profit organization has awarded more than $900,000 in scholarships to children across Canada.

Mark DeMontis was a foundation scholarship recipient and a promising AAA hockey player in Toronto at age 17 when a rare eye condition called Leber hereditary optic neuropathy took his sight.  Carnegie, who lost his sight due to glaucoma in his later years, bonded with DeMontis and invited him to tell his story to school students and organizations. Inspired by Carnegie and the Future Aces Creed, DeMontis founded Courage Canada in 2009 and traveled more than 3,100 miles from Toronto to Vancouver on in-line skates to raise funds and support for blind hockey programming for youth.

In 2016, the organization evolved into Canadian Blind Hockey, which provides programs for blind and partially sighted children and adults that include youth teams, development camps and tournaments.

“I still remember Herb always looking at me saying, ‘Mark, no matter what happens, keep the spark burning, keep the fire inside of you burning,'” DeMontis said. “Inspiring is an understatement. He saved and changed my life.”

Rosters for the 2023 Carnegie Cup will be announced on Monday, January 16 in the lead-up to the event.  Players were invited by a selection committee comprised of Canadian Blind Hockey staff, coaches, and leaders in the Blind Hockey community based on prior performances in Blind Hockey events.  The goal of the Carnegie Cup and the BHL is to create and expand meaningful competitive opportunities for high-performance Blind Hockey players.  The point system used in International Blind Hockey will not be used for the Carnegie Cup. Additional participants may be named at a later date. The current pool of confirmed players includes: