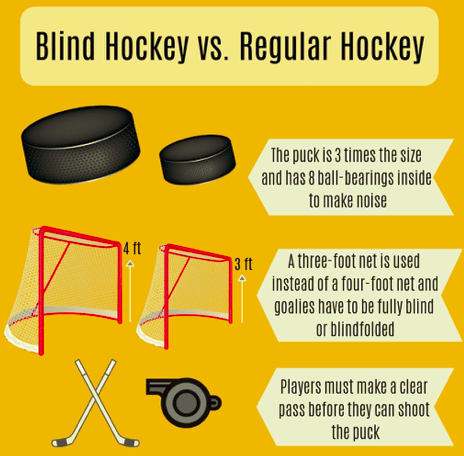 The most significant adaptation to the rules of traditional ice hockey is the “Pass Rule.” The “Pass Rule” dictates that an attacking team must complete at least one pass after they cross the offensive blue line before they are eligible to score. Once the “Pass Rule” has been completed, the referee will sound an electronic whistle that emits a distinct high-pitched chirping noise. The sound of the pass whistle indicates to the offensive players that they are now eligible to attempt to score, while simultaneously alerting the defensive players and goaltender that a shot may be coming.

This rule is especially important to make the sport accessible to players who are completely blind: especially the goaltenders. The “Pass Rule” remains completed and the attacking team remains eligible to score until the puck either leaves the zone or play is stopped for any reason. If the puck leaves the zone or the play is stopped resulting in a face-off, the attacking team would once again be required to make a minimum of one pass in the attacking zone before being eligible to score. This rule has many benefits including stopping the players with the most vision and highest skill from simply dominating games while constantly rushing end to end and scoring goals on unsuspecting goaltenders. There are no breakaways in the sport of Blind Hockey, it is truly a team game! 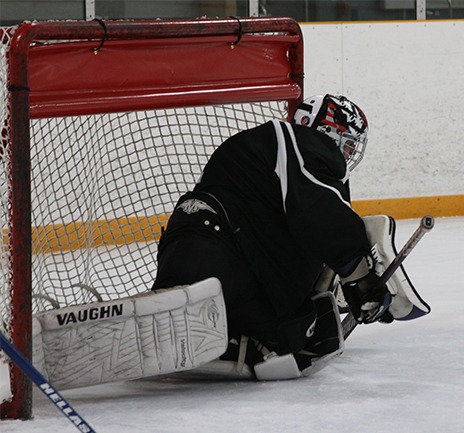 The other major significant adaptations all have to do with the goaltenders as they are playing hockey’s most important position while completely blind or blindfolded, against players who see significantly more. Since the pucks do not make much noise in the air, the sport of Blind Hockey uses modified three-foot-high nets, which are one foot shorter than traditional nets which are four-foot-height.

In instances of recreational play or practice where custom Blind Hockey nets are not available, the sport uses a “Shot Blocker” which is a tarp (usually made from canvas or strong plastic) that attaches to the net (usually by either velcro straps or bungy cord) and covers the top foot of the traditional net.

For safety reasons, no player on either team other than the goaltender is ever allowed to enter the crease, and the sport uses all standard International Ice Hockey Federation (IIHF) safety protocols including crease violations, no touch icing, and stopping the play anytime a goaltender is hit in the head with the puck.