Canadian Blind Hockey is thrilled to announce that Olympic Gold Medalist and World Champion Natalie Spooner is joining the charity to serve as its first-ever Ambassador.  Her primary role will be to help create awareness of the parasport of Blind Hockey in Canada, and to help recruit girls and boys who are blind or partially sighted into one of the 14 programs across the country. 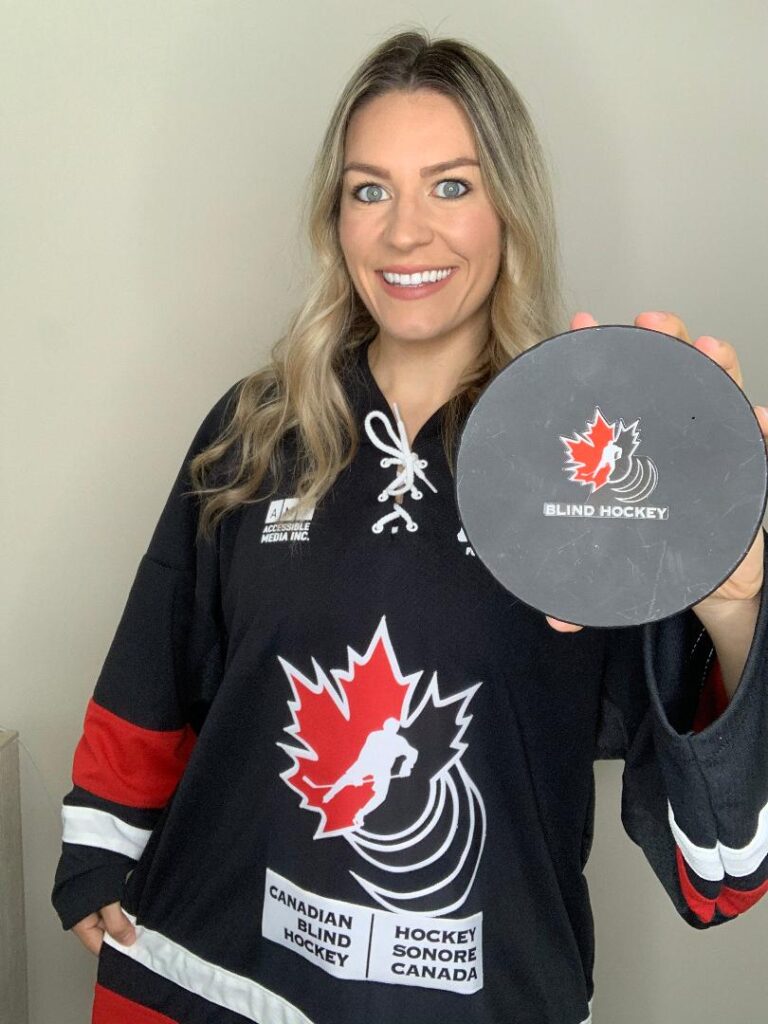 “Natalie brings an infectious enthusiasm to the game of hockey as well as every project she approaches in life,” said Canadian Blind Hockey President and National Team Captain Kelly Serbu.  “She is a perfect fit as our first Ambassador to help grow the international side of the game, the women’s side of the game, as well as the parasport in general.  We are thrilled to welcome her on board as we work together to make hockey accessible to all Canadians who are blind or partially sighted.”

The parasport of Blind Hockey is played by athletes who are blind or partially sighted using an adapted puck that makes noise and is larger than a traditional puck. Spooner has a long history with the charity as she was on hand as a celebrity guest to award medals at the inaugural 2013 Canadian National Blind Hockey Tournament in Toronto.

“When I first experienced Blind Hockey I was blown away by the fact that players whose vision ranged from legally blind to completely blind could play the game so well” said Canadian Blind Hockey Ambassador Natalie Spooner. “Hockey has brought so much to my life and I’ve always believed that everyone should have an opportunity to play and to the learn the invaluable life lessons that are taught through hockey.

It’s exciting how much the parasport has grown with the National Team competing internationally, all of the children and youth programs in the country, as well as the new Women’s Blind Hockey Development Program.  It’s an exciting time for Canadian Blind Hockey, and I look forward to helping grow participation in the game at all levels.”

In addition to helping to grow participation at the grassroots level, Spooner’s extensive experience representing Canada on the world stage will be hugely beneficial to the Canadian National Blind Hockey Team Program which was founded in 2018. Canadian Blind Hockey continues to be a leader in growing the sport around the world, with goals of founding a Blind Ice Hockey World Championships, as well as ultimately applying for inclusion in the Winter Paralympic Games.

“Having Natalie Spooner come on board with her extensive experience and success at the World Championship and Olympic levels will certainly help Canada’s management team continue to raise the bar for the National Blind Hockey Team program,” said Matt Morrow, Executive Director of Canadian Blind Hockey and Sport Director for the International Blind Ice Hockey Federation. “I think her involvement also lends credibility to Blind Ice Hockey in general and will help to open doors as we work together create a truly international parasport.  It’s been incredible to witness how far this sport has grown over the past decade, and we are excited to see how far we can take it over the next ten years.”

Natalie Spooner is an Olympic Gold Medalist and World Champion with the Canadian National Women’s Hockey Team.  She is the first player to ever play for the U-18 National Team, U-22 Canada Team and Senior National team.  Outside of hockey Natalie is an avid volunteer and enjoys giving her time to causes and charity events and is passionate about the importance of empowering women and helping to get girls active in sports. Natalie is currently serving as a celebrity judge on season six of CBC’s “Battle of the Blades.” nataliespooner.com.

Canadian Blind Hockey is the national sports organization for the parasport of Blind Hockey in Canada. We change the lives of children, youth, and adults who are blind or partially sighted through our programs which include school field trips, youth teams, development camps, regional tournaments, and our flagship Canadian National Blind Hockey Tournament.

Canadian Blind Hockey programs are made possible by our presenting partner AMI, and our national program partner the CNIB Foundation, as well as other generous partners and donors coast-to-coast.